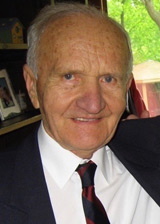 Send Condolences
Obituary / Death Notice
With deep sadness, our family announces the passing of Eugene Anthony Zlnay, peacefully in Montreal at the age of 94.
Born in Piestany, Slovakia (former Czechoslovakia), Dad completed undergraduate studies in economics in 1945 at the University of Bratislava.
He continued studying in Economics in Sweden and became fluent in many languages including French, German, Russian, Swedish, and Danish.
While in Sweden, the political winds were shifting in Czechoslovakia leading to the Soviet backed communist regime in 1948.
Dad decided not to return home and would not see his homeland again until 1986.
Dad was accepted to MBA school at Indiana University Bloomington but needed a U.S. visa.
He had also applied for a Canadian visa which he received first.
He sailed on the S/S Stravangerfiord, landing at Halifax Pier 21 May 12, 1951.
Eugene settled in Montreal, worked at the Bank of Montreal and in 1952, joined Electrolux.
While selling vacuum cleaners door to door, he met Therese Grimard, a registered nurse; they married at St Patrick's church August 29th, 1953.
In 1962, Dad moved on to real estate after being hired by Westmount Realties as a residential agent.
He was appointed Assistant Sales Manager and then Manager of the Greene Ave head office.
The merger of Westmount Realties and A.E. LePage of Toronto in 1973 provided additional opportunities for Eugene as Vice-President Residential Sales for Quebec.
Under his stewardship, the residential division experienced formidable growth through expanded branch locations across Montreal Island, South Shore, Laval, Laurentians, and Quebec City.
In 1980, Dad founded Eugene Zinay Realties expanding his brokerage activities into commercial, industrial and investment real estate.
He continued his practice until 2010.
Dad was active in the local community through the Rotary Club of Westmount since February 1976.
In addition to the development of the senior's residence Manoir Westmount and the annual Rotary garage sale, Gene became a master recruiter.
Rumour has it he holds the record for recruiting more new members to the Club than all Westmount Rotarians combined!
He was honoured as Rotarian of the year in 1988-1989 and 2007-2008.
One of his clients, a sports management firm representing hockey players from eastern Europe, recruited Eugene to assist with translation and chaperone duties for players and their families from Slovakia hoping to play in the NHL including first round draft picks.
As an immigrant from the 'old country', our father put in his '10,000 hours' to succeed professionally.
He strongly believed in education, remained faithful to his religious upbringing, was persistent and always optimistic.
Eugene also calibrated his work life balance.
An avid outdoorsman, he enjoyed tennis, swimming and kayaking at his beloved Dorval Island retreat, fly fishing on Quebec's North shore, downhill and cross-country skiing well into his eighties.
Our father and mother enjoyed travelling together exploring Canada, the United States and Europe until Mom's death in October 1985.
Dad married Claudette St-Louis on February 11, 1989 and they enjoyed a fulfilling life together until Claudette's passing in May 2018.
The memories and stories of Eugene will long be remembered.
He is survived by his children Michael (Yvonne Hiemstra), Ann (Douglas Scott), Louise (Paul Goblot).
He leaves behind 6 grandchildren: Julie (Chris Stark), Paul, David, Shawn (Emma), Noah, Eva, and great-grandson Miller (Shawn & Emma) and, his sister in law Germaine Grimard who, in her 96th year, continues to be the rock of our mother's family.
The family is thankful to the Royal Victoria hospital, Drs Vivian Loo and Marcel Behr and their teams for such compassionate care.
Arrangements are entrusted to Kane & Fetterly; a mass and celebration of Eugene's life to be held at an appropriate time at the Ascension of our Lord Church in Westmount.
In Eugene's memory, the family will donate to the restoration of the church's Casavant opus 1344 organ built in 1930.
Donations can also be made in Eugene's memory to the Rotary Club of Westmount

Messages for the Family of ZLNAY, EUGENE

My deepest sympathy. From bill forcillo I worked for him at west mount realties on grand and sumerled n d g many years ago