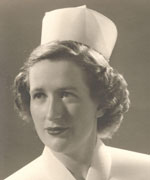 St. Malachy
5330 Clanranald
Montreal, Quebec
January 18, 2020
11:00
Send Condolences
Death Notice
Rosemarie “Rosie” Donahoe (Cabot)
. (September 16,1927- January 6, 2020)
. We have lost a real character whose winning smile, generosity, creativity, quick wit and zest for life will be sorely missed by those who loved and knew her.
. Rosie was born in Dalhousie, NB., the 12th of 16 children to Adeline Mercier and William Cabot.
. She leaves Jean Murray of Campbellton NB., the youngest of the Cabot clan, to mourn her as well as many nieces and nephews scattered across Canada and Maine.
. She was predeceased by her loving husband, Dr. Emmett Donahoe.
. Rosie attended the Filles de Jesus convent school in Dalhousie, NB graduating from grade 11 in 1943.
. It took her a while to decide what she really wanted to do with her life, taking some shorthand and typing courses in the interim.
. She had an “Aha” moment walking down Church Hill in Dalhousie with her sister Irene, realizing then that she wanted to devote her life to nursing.
. She was accepted into the February class of St. Mary’s Hospital nursing program in 1946 in Montreal, graduating in February 1949 and began her nursing career immediately at the Jewish General.
. In 1951, with her adventurous spirit calling, she spent the next 16 years nursing in small hospitals from British Columbia to New Brunswick fulfilling her wish to see Canada and traveled abroad with nursing friends she had made along the way.
.Her favourite place without a doubt was her time in Whitehorse. Rosie was nursing at the Verdun General Hospital in Montreal, when she met the love of her life, Emmett, at a St. Patrick’s dance in March 1967 on a blind date.
. They married 3 months later and spent the next 13 years very much in love and devoted to one another, travelling to many far off destinations, attending many St. Patrick Day balls, hosting dinner parties, playing bridge (Friday night was bridge night at the Nearings!) and golfing.
. Emmett died very suddenly in 1980 and being so determined to nurse again, Rosie enrolled at Vanier College and completed her Nursing Refresher course in 1982 (age 55).
. She nursed at the Catherine Booth Hospital until her retirement in 1988.
. She returned to school again in 1989 graduating with a Social Science diploma from Marie Victoria College in 1991.
. Rosie’s faith was a huge part of who she was and went to Mass daily at St. Malachy’s Parish. When that became too difficult, she would take the bus Saturday afternoons to attend the 5:00 Mass at the Oratory when she could and would also go to Saturday Mass at St. Patrick’s Sq.
. She was a very active member of the Kanawaki golfing community, playing several times a week, helping organize seasonal events (of which there were many) and thoroughly enjoying herself all the while improving her game.
. When she could no longer play, she became a Golf Channel subscriber and lived her best golfing life!
.She was a self avowed book lover from a very early age, a life long learner, a very accomplished seamstress, and extremely proud of her Acadian roots.
. She continued to travel well into retirement visiting family and friends in Western Canada, New Brunswick and Maine.
. Rosie moved to St. Patrick’s Square in 2002 where she continued playing bridge, helping to organize social events including sewing costumes for Halloween parties, decorating for Christmas, and singing with the choir.
. She was an extremely generous person, volunteering at St. Mary’s Auxiliary and Chez Doris and supporting many charitable causes.
. A fiercely independent woman, it broke her heart to leave St. Patrick’s Sq. in Jan. 2019 after breaking her hip.
. She lived life to the fullest and was an inspiration to many of her family. Her spirit will remain very close in all our hearts.
. Cremation has occurred. Please join us for a gathering on Friday, January 17 from 7:00-9:00 at Kane and Fetterly Funeral Home at 5301 Decarie Blvd. (corner of Isabella).
. Rosie’s Funeral Mass will be on Saturday, Jan.18 at 11:00 at St. Malachy’s Parish at 5330 Clanranald Ave..
. In lieu of flowers, donations can be made to Chez Doris.
.
View Condolences

Messages for the Family of Rosemarie “Rosie” Donahoe (Cabot)

To the family of the late Rosemarie Donahoe,
It was a delight to know Rosemarie in my capacity as rental agent at St. Patrick Square. She was positive, bright, opinionated, had a joie de Vivre and was indomitable. She made me feel special and will be dearly missed.