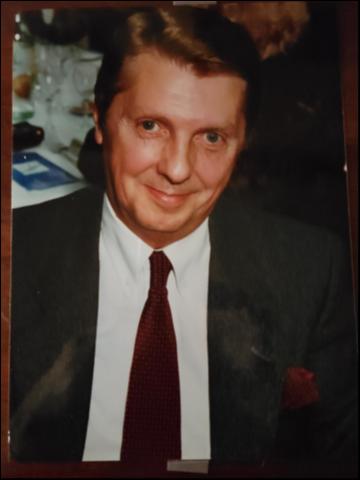 Pierre Yves Rémond, Paris, March 13, 1946 – Montreal, November 12, 2021. Better known as Peter, passed peacefully to the next world after a full, adventurous, and cultured life and a long, valiant, and compelling dance with Parkinsons. He is survived and celebrated by his wife Georgia (né Egerszegi) of 48 years, daughter Christina, his twin sisters François and Catherine and many nieces and nephews who knew him as ‘oncle Canada.’

He was born in Paris 1946 on the heels of the war and liberation.  After finishing military service, he immigrated to Canada in his early twenties where he began a career with Air Canada and retired after 36 as a Flight Service Director. Despite some bumps along the way, his career was a source of pride and pleasure. He was the ultimate punster methodically crafting language into a new art form. A fountain of knowledge and humor, he extended his love of all things classical, historical, musical to those around him.

Retirement brought with it the unwelcome and difficult diagnosis of Parkinsons which he valiantly fought by taking up dance classes and singing lessons, even staging his own solo cabaret. Despite the daily challenge of living with the illness, his later years were mellowed, softer, and more deeply connected to those he Loved. At times, it seemed he had an aperture to the infinite through the window of his experience with illness. After a challenging pandemic year that had him leave his home for long-term care, his passing was mercifully swift, loving, and peaceful, and a profound release into freedom and a new horizon.

A memorial gathering will be held in Montreal Friday 26 Nov. at 1pm. A religious service will follow in France where he will be laid to rest in his ancestral village in the Loire Valley. Please contact the family for location to attend.

May he be joyously received by the heart of the hereafter. And now these three remain: faith, hope and love. But the greatest of these, is Love.

Messages for the Family of Remond, Peter

To Peter's family,
On behalf of myself and the Adapted Exercise clinic staff at Cummings Centre, we would like to extend our deepest sympathies for your loss. Peter was a beautiful person, always cheerful and kind to all those around him. He helped to fill the room with his presence and charm. He will be missed and remembered by all. May God give you comfort and strength during this difficult time.
sincerely,
Maria Fragapane & Adapted Exercise Clinic Team- Cummings Centre