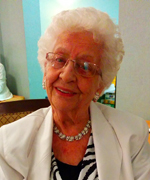 In Her 99th year, Louise left us for greener pastures, leaving son Philip Robertson, grandchildren Galen and Hadleigh Robertson and her cherished great grandson Lee, to mourn her departure.

A longtime resident of Grand Boulevard, Louise spent her final years at the Manoir Westmount and subsequently the Fulford residence. Our family extends thanks to all who helped her these last few years, particularly the wonderful staff at the Fulford.

Fluently bilingual is a term that is too loosely used these days. Louise was truly fluently bilingual. After studies at College Notre Dame, (bilingual secretarial program at the “mother house”) she worked as a secretary at several law offices and then Alcan, where her talents were truly appreciated. After only four years of marriage She was widowed in November 1953 as the result of a traffic accident involving her husband Bill. She was left with a five month old baby to care for. She persevered, returning to Alcan to rise to the position of executive secretary to the vice president. During this time, she was awarded the French embassy’s prize for translation and was first in her McGill translation course of study.

Louise retired from Alcan in 1960, to pursue her dream of being a stay at home mom by marrying Leonard Bonin (d 2001) and moving to Grand Boulevard.

If her experiences taught those who loved her anything, it was the value of perseverance and determination. She lost her beloved father Louis Moquin at age eight but bounced back. A window in 1953, she bounced back, a second time widow in 2001 and bounced back again!

Her resilience was amazing! She will be missed by all whose lives intersected with hers.

A memorial service will be held at the Kane & Fetterly funeral home located at 5301 Decarie Boulevard (corner of Isabella) at 1pm Friday November 8th.