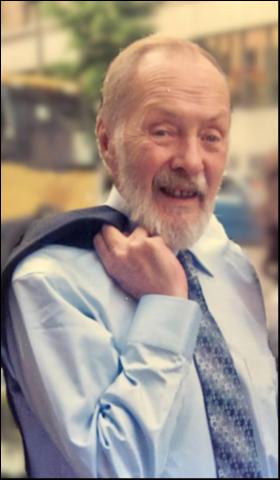 Peacefully at home on October 2, 2020 at the age of 88, our beloved “Mr.B” left us after a mercifully short battle with pancreatic cancer.

Kind, generous and a true gentleman in every sense of the word, he will be missed beyond measure. Raymond dedicated over 25 years as a teacher and principal to the Montreal Catholic School Board. His memory will forever live on through the great stories he shared with those who were close to him.

He is now reunited with his late brother George (Mary), and his parents Arthur Blanchard and Jane Clarke, who left him much too early.

He lives on in the hearts of his wife, Frances McLaughlin, children Jane, Andrew (Beverly Fox) and Jennifer, as well as his adored grandchildren Alex (Daniel), Malcolm and Julien.  He was the sturdy pillar that united his family and held them up with his wisdom, composure and generosity. He was also the very special “Mr. B” to Jayde and Jayme, as well as the countless other friends whose lives he touched.

He is also greatly missed by his beloved and loyal furry companions, Lulu, Mini-Pooch and Squabbles, and his love and kindness towards animals will always be remembered.

A big thank you to the dedicated and ever-hardworking staff at the Jewish General Hospital and the local CLSC Samuel de Champlain support team.

A celebration of life will be held at a later date, sometime in the Spring

Messages for the Family of Blanchard, Raymond

My sincere condolences to the family of the late Raymond Blanchard, I knew Raymond for a number of years while he was a patient of my late husband, Dr Marvin Clamen. He was always the early bird in the office, and we had many lively discussions. He was a kind and gentle person - the consummate gentleman. May you draw strength from your memories of this fine man.
From: John Woolfrey

My condolences to Alex and Jane. I will always remember your grandfather and dad as being a true gentleman.
From: Anna Maria Fata-Greco

I had the good fortune to work with M. Blanchard at Saint Alice school in Montreal North in the 80s. His office door was always opened and both teachers and pupils would use it often knowing that he would listen and encourage us to achieve our true potential. It was always a joy to come to work knowing that if we needed help, he was there for us. He will be remembered with great fondness and admiration.
My sincere condolences to the family.